Former captain of the Maple Leafs, one of the most sought after retired players in the Toronto area, named to the Top 50 All-time Leafs list, always fun to be around. 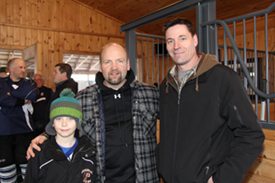 Wendel with fans at Clark Gardens

Wendel Clark is indisputably one of the most popular players to ever wear Maple Leafs blue. The former Leafs captain played 13 of his 15 NHL seasons with Toronto and was idolized by thousands of hockey fans. Selected first overall in the 1985 NHL Entry Draft by the Leafs, Clark also spent time playing for the Quebec Nordiques, New York Islanders, Tampa Bay Lighting, Detroit Red Wings and Chicago Blackhawks. One of Clark’s biggest accomplishments however was in his teen years when he helped Canada’s national team take the gold medal at the 1985 World Junior Hockey Championships. Clark played 793 games of rough and tumble NHL hockey, scoring 330 goals and 563 points with 1,690 penalty minutes.

Very few hockey players attract the love, respect and sometimes adoration as Wendel Clark. Although quiet and easy-going, Clark has achieved a rock star-like status among the members of the Leafs Nation. A player who combined grit with goals, the Maple Leafs drafted Clark first overall by the Toronto Maple Leafs in 1985. 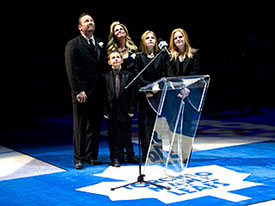 This came six months after he helped Canada win the 1985 World Junior Championships. Making an immediate impact in his rookie year, Clark scored 34 goals for 45 points and racked up 227 penalty minutes for good measure. One of the best body checkers in the league, he was not afraid to drop the gloves either. However, his physical style of play took its toll and he retired in 2000, at the age of 33. Although he had brief stints with the Quebec Nordiques, New York Islanders, Detroit Red Wings and Chicago Blackhawks, Clark played in Toronto for 13 out of 15 seasons.